Although a government may claim to represent the wishes of the majority, and have a mandate for it’s manifesto, closer inspection reveals that the claim can not possibly be based on fact.

Consider the steps in the diagram below. Even if we use a conservative figure of 50% for each step, the best that can be achieved with this multi-party system (2 or more) is about 12.5% of the electorate being reasonably well represented. In fact, voter turnout could well be as low as 25% under some conditions, which would reduce the final count even further, or as high as 80%, which would improve it. 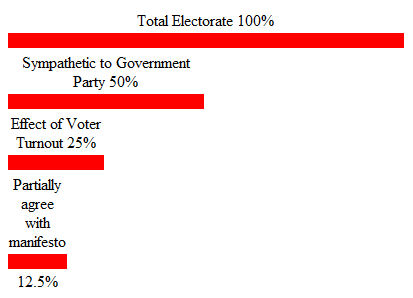 Part of the problem is that a party manifesto will normally only be partially accepted by a voter, but because there is no possibility to vote for individual items, the manifesto must be either accepted or rejected in it’s entirety. Unless a fundamental change in the system were to be introduced, there is no alternative to this “one size fits all” policy.

Under these conditions, it is unreasonable for a government to claim that it has a mandate for any serious changes in any part of functioning of the state or country.

It should also be noted that the figure for agreement with government policy varies considerably during the government’s term of office. It normally reduces, and the government will aknowledge this by tackling all the controversial parts of the program early in the term. The less controversial matters are left till the latter part, to avoid antagonising voters before the next election.

This site uses Akismet to reduce spam. Learn how your comment data is processed.